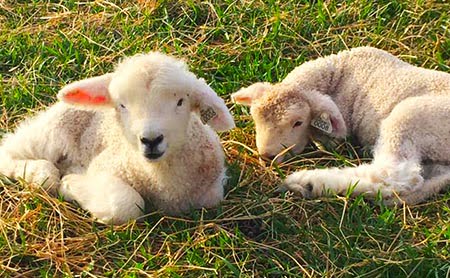 Breed Standards
Breed standards establish the ideal animal within a breed. Standards are developed by identifying the requisite and desirable traits and characteristics displayed by the ideal animal. There are many descriptions of breed standards; the one found in Wikipedia is both succinct and useful:

A breed standard in animal fancy and animal husbandry is a set of guidelines which is used to ensure that the animals produced by a breeder or breeding facility conform to the specifics of the standardized breed.

The ARBA Board has adopted a one breed; one standard approach.

Standard of Excellence underscores the aspirational nature of a breed standard: in effect, the standard describes the ideal animal.

Similarly, an individual breeder may choose to emphasize one trait or characteristic over another: breeders raise Romneys to meet varying local conditions. A variety of types of Romneys have been developed to adapt to the climate, feed, location and type of soil on which they are grown.

When choosing which Romneys to register, show, and use for breeding, members should refer to the standards to determine if an animal is worthy of registration, and whether the animal should be used for breeding. There is no inspection requirement as part of the registration process, and all ARBA members rely on the integrity of other breeders to ensure quality stock, and the future of the breed.

One Breed: One Standard

Whether a Romney is white, natural colored (black) or moorit (brown), the animal is first and foremost a Romney, and as such, should share the traits and characteristic that define the Romney breed. The ARBA board has adopted a unified breed standard; and where variation from the general standard is required based on color, those variations are specifically identified.

For the purpose of the standard, ARBA will refer to:

Romney sheep, as a dual purpose breed, exhibit the essential qualities found in all good meat-producing sheep. They are sturdy animals, with a strong bone structure, large body capacity and a uniform fleece which is characteristic of the breed. The Romney is a mid-sized to large, well-muscled sheep. Its size is due to solid bone structure and muscling, and a substantial body versus long legs or neck. The Romney will continue to grow and mature until 2-3 years of age; consistent and ongoing growth during the first two years will result in an adult sheep that weighs within the target range.

Weight: This will vary as breeders raise Romneys to meet varying local conditions. A variety of types of Romneys have been developed to adapt to the climate, feed, location and type of soil on which they are grown.
Mature ewes, 2-3 years of age: should be at least 150 pounds
Mature rams, 2-3 years of age: should be at least 200 pounds
Form: Straight top line blending from the neck ending at a square rump. The body should be deep and broad although the animal should be narrower in the front than the rear.
Quality: Bone should be strong but not coarse in character. Rams should look masculine and ewes feminine. Hair should be fine and the skin pink in white animals, black in natural colored, and brown in moorits. White legs are desirable in white sheep but minor discoloration in the hair on the legs is acceptable.
Points: (hooves, nose, eyeliner, lips) should be solid black in white & natural colored Romneys and brown in moorit individuals; a mottled nose should be discriminated against, and a pink nose in any color Romney should be considered a disqualification.

Flesh Covering: Animals should be shown in working condition.

Head: Large clear eyes; alert look; broad face with width between the ears. The poll should be covered with wool and free of horns and hair. The head should be carried high and be level between the ears. Ears should be white or the respective color in natural colored or moorit individuals, small, felted, and rather thick; minor black spots on a white Romney are acceptable on the head and ears if they are limited to the hair and limited to the size of a silver dollar. In White/Natural colored sheep nostrils should be black In moorit the nostrils should be brown. A mottled nose should be discriminated against – mottling can be either black with gray or black with pink in white Romneys. Black with slate gray is preferred over black with pink. A pink nose should be considered a disqualification in any color Romney. A minimum amount of smut above the nose is undesirable but not a disqualifier. The face should be open, wide, and mostly free from wool, although some wool on the cheeks is acceptable. Wool blindness should be strongly discriminated against. Jaw and muzzle should be wide and strong with teeth meeting the pad correctly.
Neck: Moderate length, with no loose skin or dewlap along the front of the neck; smoothly joined with shoulders.

Shoulders: Compact on top but not rough or sharp; joined smoothly with neck and body; covered moderately with flesh.
Brisket: Full; round, but not overly extended.
Legs: Legs should have a strong bone structure. White legs are desirable in white sheep, otherwise they should be consistent with the overall coloring of the animal (black or brown). Legs should have usable wool that is strong but not coarse, and which extends to the knees. Additional fiber may extend to the hock. Kemp, a course, short, coarse fiber, is also found on the leg, and should be white in white Romneys, black in natural colored Romneys, and brown in moorit Romneys – minor discoloration on leg hair acceptable. Front legs shall have a slight curvature above the knee, shall be straight from that point down and shall be wide set. Pasterns should be strong and upright. Hooves should be black in white & natural colored sheep and brown in moorit individuals although some light colored variations are acceptable and will be slightly discounted.

Chest: Deep and wide.
Ribs: Well sprung, long, and showing adequate capacity.
Back: Broad although somewhat narrower in the front than the rear; the back should be straight with smooth blending from the neck and ending at a square rump.
Loin: Wide and long.

Hips: Level, smooth, and wide apart.
Rump: Long, level, and wide. Should not be a sloping rump.
Thighs: Deep and full.
Legs: Rear legs straight and wide set apart from a rear view; not post legged; should have a slight natural curve from side view. Pasterns should be strong and upright. Hooves should be black in white & natural colored sheep and brown in moorit individuals although some light colored variations are acceptable and will be slightly discounted.
Scrotum: The ram’s testicles should be large, even in size, and well developed.
Udder: The ewe’s udder should be well formed, large and soft with evidence of two good teats.

Quantity: Ewes should shear 8 pounds or more, and rams should shear 12 pounds or more per year with a yearly staple length of five inches or more. When shown, fleeces need to be of adequate length to display the Romney fleece characteristics and quality.
Quality: Romney wool is moderately dense but parts easily and is free opening in nature with a well-defined crimp from butt to tip. Uniformity of coverage is essential and quality should be maintained from the shoulder to the back of the flank; a weak or open back is not acceptable. Gare (long, hairy medullated fibers that do not spin or dye) is not acceptable within the fleece, and should be strongly discriminated against. The fleece is lustrous; it hangs in separate locks with minimal cross fibers between the locks. Natural colored & moorit fiber should be pigmented black or brown respectively. Natural colored and moorit fiber should be pigmented black or brown, respectively, and the color may be variegated or uniform.
Grade: Wool with a spinning count of 50 to 44 inclusive (equivalent to a fiber diameter of about 29 to 38 microns) is within the breed standard. No preference should be given to a coarser or finer fleece as long as it is within the breed standard. Each has its environmental place, its markets, and each should be grown to suit specific manufacturing needs and requirements. Fleece should be bright and white (or black or brown depending if the sheep is natural colored or moorit), moderately dense but parts easily with free opening well-defined staples that are full and oval shaped, not flat. In addition, it should have the necessary bulk and handle that is expected of wool of comparable micron.
Condition: Fiber should be strong, clean, soft, and bright. Sheep which might have been rinsed with water 6-7 weeks before being shown should not be discounted providing they exhibit the characteristics of a Romney fleece.

Entropion (breeders should use this as a standard when deciding which sheep to breed); Unsound mouth (see articles by JoAnn Mast in the Ramblings for reference); solid pink nose; black spots within the actual fleece for white animals (although spotting on the hair is not a disqualifier. Minor black spots are acceptable in a white sheep if they are limited to the hair and limited to the size of a silver dollar.)

Approved by the Board of Directors on April 8, 2017