The BASE© of Color in Sheep

Recent years have provided new insight into the color genetics of sheep, providing informed breeders with better control of lamb and fleece color. This control can equate to added income when the breeder begins to plan for lambs and fleece to fill their market’s demands, but this is only true if the breeder understands enough of this relatively new science to be able to put it to use.

As a brief review of high school biology, we can recall that every cell within a body – whether plant or animal – contains a nucleus that holds DNA. DNA determines the shape, form, and details of the creation of which it is part. DNA comes in chromosomes pairs. Each species have specific numbers of chromosomes. Human cells have twenty-three pairs of chromosomes, or forty-six in all. Sheep have fifty-four chromosomes or twenty-seven pair. The number of chromosomes does not reflect the complexity of the resulting animal or plant – it simply defines what that animal or plant will be.

Each chromosome is made up of thousands of genes – the building blocks of genetic coding that specify particular traits. Every trait in the being is specified by its genetic coding or DNA, and exactly half of any gene pair comes from each parent.

Each gene of a gene pair resides at a locus or location along a specific chromosome – when discussing multiple locations, we call them loci. For example, the gene in sheep that determines whether that sheep will be black- or brown-based, designated as the B-locus, is located on Chromosome 2. Each identified gene pair has a designation and a known locus on the chromosome of which it is part.

When tracking sheep color genetics, there are four specific loci that determine much of what you see when you look at the sheep. These are often called the BASE© of color, since this acronym includes all four of these specific gene pairs: B, the black-brown locus, A, the agouti or pattern locus, S, the spotting locus, and E, the extension locus. We will look at each of these, in turn, to understand how they work together to produce the hair and wool color that we see when we look at our sheep.

Yet before we get there, there are a few definitions that must be reviewed. The genotype of an individual is the genetic make-up of that individual – which genes they carry. The phenotype is then what we see in the individual because of the genotype in its environment. For color, the phenotype you see – the fleece or hair coloring – is the result of the genotypes – or genes – of that sheep.

At any one locus, there are limited numbers of expected genes. The choices of genes for a particular locus are called alleles. The number of possible alleles at any location varies; as we will see, some loci have only two possible allele types, while others have dozens.

Genes are not all created equal – they can have dominance. One gene of a pair is dominant over the other if, when both are present, only the one dominant gene can be seen in the phenotype – the other of the pair that is hidden in the phenotype but present in the genotype (and can be passed to the next generation) is then said to be recessive. If, when two different genes are present in the genotype and some presence of both can be seen in the phenotype, then those genes are said to be co-dominant. Now, on to the BASE of sheep color! 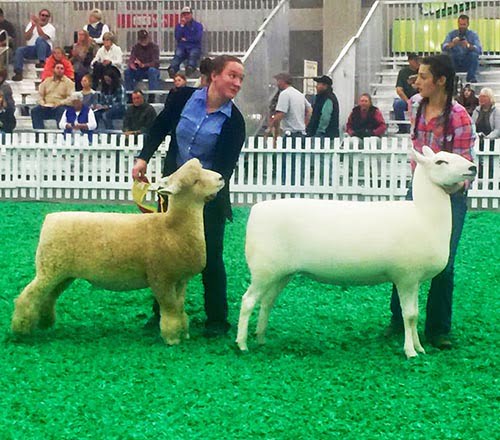