Patterns in sheep – the Agouti locus

Every sheep also carries a pair of genes at the agouti locus, designated as A, that determine the amount of white or tan pattern that expresses over the black or brown color base. Again, one of these alleles will come from the sire and one from the dam. The resultant pattern coming from the combined pair can produce a sheep that expresses anything from solid white (complete pattern coverage) to a solid black or brown sheep (with no pattern expression whatsoever over the black or brown color as determined by the B-locus).

The placement of white/light depends upon the specific genes located at the agouti locus, with the most dominant possibility being the white and tan allele, designated by Awt. Because Awt is dominant at this locus, even a single copy of this allele will produce a phenotypically white sheep (of genotype AwtA_). If the sheep carries two copies of white and tan, a genotype of AwtAwt, then every offspring of this sheep will also be phenotypically white.

There are a number of possibilities for alleles at the agouti locus and the identification of these alleles from phenotype is much more successful in the first weeks of life when the contrast between the light and dark areas is strongest. More agouti alleles continue to be identified, so any but the most recent lists are likely missing the latest discoveries. Few if any sheep breeds include all of the alleles identified, and the following list is not exhaustive. Yet, notice that the level of dominance is dependent upon the amount of white/tan in the pattern, with Awt fully dominant to the other possibilities, and the darkest possibility – self-color (solid color with no white) or Aa – being the most recessive. In order, the most common possibilities at the agouti locus are: 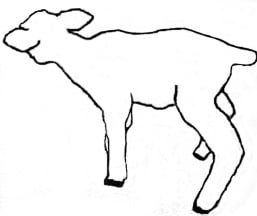 Dorsal areas of white/tan with dark ventral areas, mottled white/tan display in inner ear and wrapped down on either side of tail and anus; white/tan tail; a darker area between chin and brisket is frosted over with white or tan 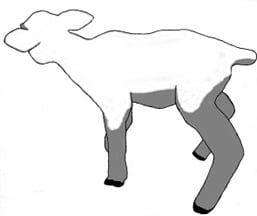 Similar to Albf, but eliminate white display in inner ear and on either side of anus, tail is bifurcated with light dorsal and dark ventral, dark channel from chin to brisket

In early years, called reverse badger, is dark over the dorsal and light in the ventral areas, with white expression in the inner ear and dark outer ear. The tail is bifurcated with light ventral and dark dorsal. There is often a white “comma” in front of each eye.

Lighter dorsal and darker ventral with some white display in inner ear; white on outer ears, either edging or fully white (depending on breed); much white display on face creating facial “drama”; white display on either side as a “saddle” with darker area forward and back, dark tail with white display commonly found beneath the tail as a “square” around the anus; some possible “fingers” of display from sides down onto belly; white/tan display at front knees

White display on outer portions of inner ear, white passes through horn buds, includes white display around the eyes, and proceeds down to include mustache, creating a prominent “U” on face; frosted tips on belly except for the brisket area; possible lighter area on either side at top of rear leg or hip

Similar to light blue, but darker overall with less facial drama (but often a ring of white/tan that rings the nose and includes white teardrops). Saddle is present but darker than light blue; no display at front knees and no white/tan fingers onto belly (belly is dark)

White display in front and rear flanks can be seen from the side, with front flanks connected with white across or just above brisket; white display on top lip sometimes called “sugar lips” by breeders; color in fleece area generally lightens dramatically with age

Often similar in display to light blue, but a much darker face with little of the white/tan display of light blue except for teardrops usually high and tight in the duct. Longer hair or wool is common at sides of jaw, and this can be lighter in color with evidence of agouti display. The often seen “square” at the anus in light blue can be missing or reduced in size and shape to simple outlining of the anus in white. An obvious saddle of agouti display may be evident or may be so dark as to be mistaken as not present.

A very dark allele with very little white expression that can easily be covered by spotting. This allele expresses with a small white area (about ¼” in diameter) between the eyes, and similar-but-smaller areas at the area where the back of the ear meets the head and where the jaw meets the neck. These latter expressions can be so small as to be easily missed. This allele can lead to incorrect proposals for the second pattern since it can mute any additional display.

Solid color (determined black or brown by B locus)

Paired co-dominant alleles will generally produce all of the white/tan display of each of the individual alleles, although some areas of white/tan may appear darker if the paired allele calls for black in this area. Parsing the agouti display of a given lamb requires photographing all of the white/tan display and then finding the two agouti alleles that would produce white or tan in the areas where display exists on the lamb, usually beginning with the lighter of the two alleles.

The light blue color pattern is one of the most strongly expressive of the patterns found in the Romney. Its definitive displays can overwhelm any set of displays coming from the lamb’s secondary agouti allele. Thus, this lamb’s full genotype can be fully known only through its progeny. This lamb’s genotype is best notated as AlblAx (where “x” could be any other recessive color pattern). Compare Figure 1 photo array to the drawing of Albl shown above.